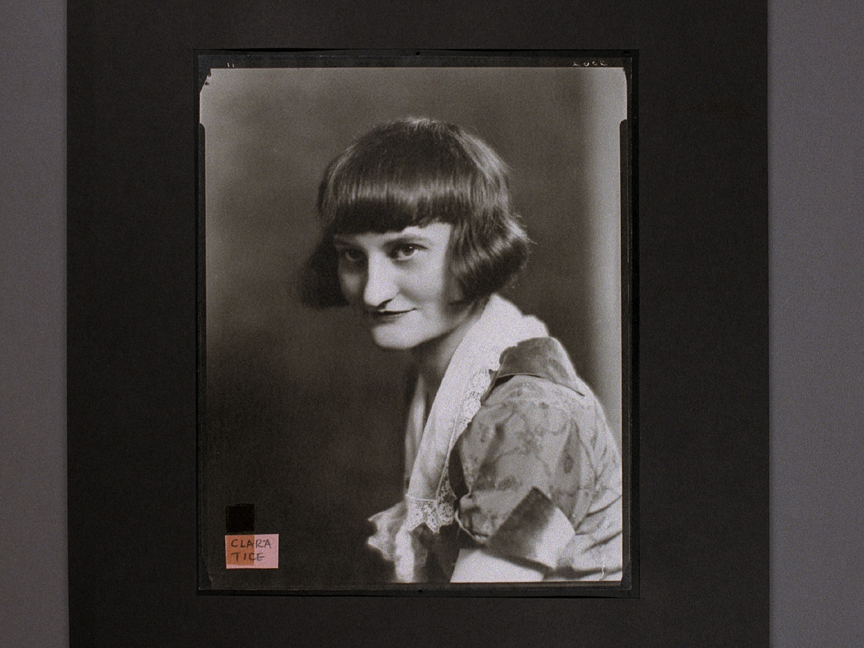 “At the Little Thimble Theatre.” The Lotus Magazine, Oct. 1915, pp. 47-48. JSTOR. Although this concise article lacks an author, it resonates with a playful and intriguing personal voice. The article serves as a straightforward and honest review of the New York comedy production “Greenwich Village,” for which Clara Tice—in the midst of her involvement in NYC theater— designed the curtain. While the anonymous author of the article is biased in his or her confident praise of Tice’s artistic accomplishments, the author provides an unusual viewpoint which adamantly praises Tice’s highly controversial nude illustrations. A depiction of Tice’s curtain-design is also included in the article and serves as a helpful visual reproduction of Tice’s less controversial and more widely-accepted work.

“Clara Tice lights Guido Bruno Garret.” New York Times, 11 May 1915, p. 8. ProQuest. Lacking an author, this newspaper article offers first-hand insight into the array of opinions surrounding Tice’s early works and exhibitions in Greenwich village. The article serves as an overwhelmingly positive celebration of the forms, colors, and simplistic design elements exhibited within Tice’s early work completed during her late teens. Such a positive appreciation of Tice’s work contrasts with popular negative opinion of Tice’s work. Despite its biased perspective, this article is useful in the way in which its anonymous author’s tone and opinion can be compared to other perspectives on Tice throughout the span of Tice’s artistic career.

Keller, Marie T., editor. “Clara Tice, “Queen of Greenwich Village”.” Women in Dada: Essays on Sex, Gender, and Identity, edited by Naomi Sawelson-Gorse, The MIT Press, 1998, pp. 415-441. Author Marie T. Keller is a humanities and arts professor at Worcester Polytechnic Institute who learned about Clara Tice through direct access to the Tice estate and interviews with Clara Tice’s niece, Elizabeth Yoell. Keller’s detailed though simply formatted and accessible chapter concerning Clara Tice serves as in-depth biography of Tice’s life and artistic career. Due to Keller’s first-hand interviews with a direct relative of Tice, the chapter is riddled with rare and intimate anecdotes about Tice’s life, providing a glimpse into Tice’s identity as both a creator and as a woman. The chapter also includes five of Tice’s illustration, pulled from various time periods and contexts, offering the reader a brief though visible timeline of a selection of Tice’s work.

Lindt, Susan E. “An en-Tice-ing character.” Intelligencer Journal, Nov. 2007. ProQuest. Author Susan E. Lindt is a contributing author to Intelligencer Journal who attended the 2007 exhibit “Clara Tice: A Dada Woman” at the Demuth Museum in Lancaster, Pennsylvania. Lindt’s casually-voiced and oddly formatted article reads like a blog post, imbuing its contents with a whimsy which dismantles its chances of being considered particularly credible or scholarly by an academic audience. The article plays two roles simultaneously. It is both a collection of curious details and anecdotes concerning Clara Tice’s life and artistic career and it is a biased review of Tice as an artist. While the article provides the reader with a contemporary perspective regarding Tice’s work, its multiple grammatical errors and strange formatting (which reads more as lazy than avant-garde) renders it fairly inaccessible and illegitimate.

McGee, Celia. “Clara Tice: Meredith Ward Fine Art.” ARTnews, Feb. 2010, p. 107. Author Celia McGee is a contributing author to both online and print versions of ARTnews, who attended the 2010 exhibition of Clara Tice’s work at the Meredith Ward Fine Art gallery in New York City. McGee’s brief, conversational review of the 2010 show on Clara Tice offers a contemporary perspective of Tice’s work as viewed through a formal exhibition. While McGee’s review is fresh and insightful, it loses credibility through McGee’s sardonic tone and through the series of humorous assumptions McGee makes regarding the lives of artists working in New York during the nineteen twenties. Thus, the review serves as a poor source of realistic information regarding Tice’s life and artistic career. Its value lies in its ability to communicate a contemporary and honest perspective on Tice’s artwork.

Ross, Lauren. “Clara Tice (1888-1973).” Making Mischief: Dada Invades New York, edited by Francis M. Naumann and Beth Venn, Whitney Museum of American Art, 1996, p. 190. Author Lauren Ross is the curator of the Institute for Contemporary Art at Virginia Commonwealth University who holds two degrees in art history and has contributed essays to publications by artistic organizations including White Columns and The Studio Museum in Harlem. Ross’s concise though informative biography on Clara Tice serves as an introduction to Tice’s life and artistic career. Unlike other biographies on Tice, Ross notes the variety of creative careers Tice pursued throughout her life, thus portraying her as an interesting and multifaceted figure in Dada. The intriguing variety of Tice’s careers briefly noted by Ross—illustrator, publicist, set-designer, window-display creator—serve as pleas for further exploration of Tice’s identity.