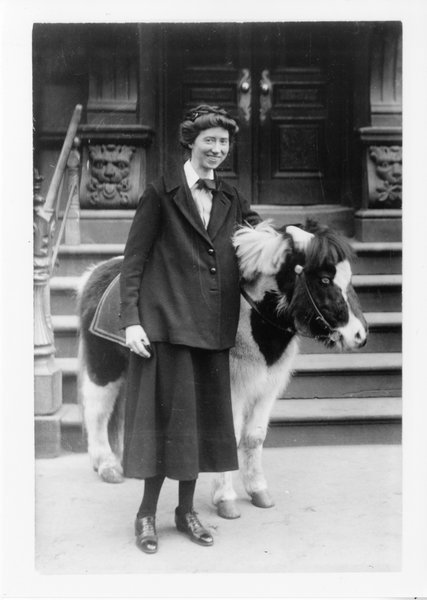 Born in 1887 in the manse of the Presbyterian church in Kirkland Missouri where her maternal grandfather was pastor, Marianne Craig Moore never met her father, who had suffered a nervous breakdown and been institutionalized before her birth. Moore, her mother, and her brother lived together (moving sporadically) until 1905, when Moore began attending Bryn Mawr College in Pennsylvania (Gale). It was there that Moore published her first poems and, Hicok argues, developed a feminist rhetoric centered on the notion of the “modern woman” that is later evident in Moore’s poems “Black Earth” and “Peter” (Hicok 485).  It was also at Bryn Mawr that Moore began to explore both her infatuation with animal forms (which later manifested itself in poems like “A Jellyfish”) and her desire for women: interestingly, despite her many relationships with women, Moore herself never called herself a lesbian (Gale, Kent 184).

Moore graduated from college in 1909 and in 1918, after seeing some of her poems published in the avant-garde little magazine Others and taking a trip to visit its publisher Alfred Kreymborg and his circle (including Mina Loy), Moore moved to New York City’s Greenwich Village with her mother (Miller). From 1921-1925, Moore worked at the Hudson branch of the New York Public Library. During her employment at the library, Moore took a trip (1922) to Bremerton, Washington to visit her brother (Hadas). While she was there, Moore climbed Mount Rainer and was inspired to start some of her most well-known poems “An Octopus” and “Marriage” (Kent). In 1924, an extended book of Moore’s poetry that included fifty-three poems was published in the United States under the title Observations. In the same year, Moore won a $2000 award for achievement in poetry from the little magazine The Dial (Gale).

Upon ending her time at the library in 1925, Moore replaced Scofeild Thayer as editor of The Dial, a positon she held until the magazine was discontinued 1929. During her time as editor, Moore’s poem “A Graveyard” appeared in the Anthologie de la nouvelle poésie as her first work to be translated into a foreign language. After The Dial ended, Moore and her mother moved to Brooklyn and Moore stopped writing until, in 1933, she was awarded the Helen Haire Levinson Prize from Poetry, which gained her national attention and spurred her to renewed creativity. 1935 saw the publication of a new volume of poems entitled Selected Poems, which received many praises from her peers but sold poorly (Gale). 1935 was also the year Moore met poet Elizabeth Bishop and they began an extende love affair (Kent). After several publications in the 1940s, Moore was awarded a Guggenheim fellowship for creative writing in 1945 and, a year later, a $1,000 grant from the American Academy of Arts and Letters. With this money, Moore began meticulously translating the Fables choisies, mises en vers by Jean de La Fontaine. This project took almost a decade and, upon its completion, it caused Moore a great loss of confidence when it was rejected by the first publishing firm she submitted it to (Gale).

In 1947, Moore’s mother died. Besides Moore’s time in college, they had lived together for nearly all of Moore’s life and, she had relied heavily on her mother’s guidance for revising her poetry. The loss of her mother, in fact, left her briefly unsure of her abilities (Kent). This was remedied, however, when in 1952 she won a Pulitzer Prize and a National Book Award (Gale). In 1954, her translations of Fables of La Fontaine appeared on the market, quickly followed by an anthology of critical essays on writers and authors Moore had written (Predilections) another anthology of poetry (O to be a Dragon, 1959) (Hicok).

In the 60s, Moore “emerged as somewhat of a celebrity […] tricorn hat and black cape became her personal insignia at public events,” (Gale) was featured in Life, the New York Times, the New Yorker, and was asked by Ford Motor Company to suggest a name for a new series of cars. In 1966, Moore returned to Greenwich Village. In 1968, she suffered a series of strokes and she lived a very secluded life until she died in her sleep on February 5th 1972 (Miller).

Address in Florence or New York: When Moore and her mother first moved to the city in 1819, they moved into building number 14 at St. Luke’s Place, Greenwich Village, New York City, New York and they stayed there until 1929. In 1929 Moore and her mother moved to 260 Cumberland Street in Brooklyn, New York, where Moore’s mother died in 1947. Moore continued to live in Brooklyn until 1966 when she moved back to Greenwich Village where she lived at 35 West 9th Street in apartment 7B until she died there in her sleep in 1972.

Dates & Places of Overlap with Loy: The spaces in which Mina Loy and Marianne Moore overlapped were much more theoretical than they were physical, although they were introduced at least once. In October of 1915, the editor of Others Alfred Kreymborg, accepted five of Moore’s poems the December issue of Others. Kreymborg then reprinted these poems in an anthology that included work by Mina Loy, which was published in 1916. Thus, their first “introduction” was the meeting of their work. This was quickly followed, however, by a true introduction when Moore traveled to New York at the end of 1915. During Moore’s visit, Kreymborg introduced her to a group of writers that included poets like William Carlos Williams and Mina Loy (Moore). There is not much written about their impressions of one another but, their work appeared side by side many times after that (perhaps more times than they were side by side themselves, although it is possible they overlapped in Greenwich village in 1918 after Moore moved there and before Loy sailed to Buenos Aires) (Miller).

Avant-garde movements the figure was associated with: Moore was primarily associated (and identified herself) with modernism. That being said, one could possibly make an argument for a Mallarmé-esque tendency towards conventions of futurism: “her interest in what is being said is just as much in the how as in the what” (Hadas par. 20).

Brief summary of the figure’s Biographical/Historical significance: Moore was a Pulitzer Prize winning American modernist Poet whose work was characterized by linguistic precision and vivid description. She served as the editor of the little magazine The Dial from 1925-1929 and was well respected amongst her modernist contemporaries.

Summary of the figure’s Relationship to Loy: what was the nature of their overlap or connection? Was it social, literary, artistic? Were they involved in collaborative ventures publications, exhibitions, performances, readings)? The relationship between Moore and Loy was far more textual than personal. Beyond being published together in Others and Poetic anthologies, They were often placed side-by-side by critics. For example, in 1918, Pound reviewed 1917 the Others anthology. Of all the poets, he singled out the works of Mina Loy and Moore for special praise and, in 1921 he wrote Moore and asked, “Also, entre nooz: is there anyone in America except you […] and Mina Loy who can write anything of interest in verse? And as for prose???” (Moore 453). They also addressed similar issues in their texts: both Loy and Moore exhibited a feminist language that was likely influenced by Greenwich Village and, as Miller tells us, the motif of religion in both of their works was similar: “like Moore’s, Loy’s identification with Judaism is consonant with her Christian faith” (Miller 38, 172).

What other artists/writers did your figure come in contact with?
-Hilda Doolittle (H.D.) was the editor of the London-based Egoist, the bimonthly in which her first several professional poems were published
-Alfred Kreymborg was the coeditor of Others magazine, in which many of Moore’s poems appeared
-Alfred Stieglitz- photographer
-Wallace Stevens- poet
-William Carlos Williams- poet
-Bryher (Winifred Ellerman) was one of H.D.’s patrons and lovers who helped H.D. publish twenty-four of Moore’s poems in a book titled Poems in 1921
-Scofield Thayer- editor of the Dial (pro-modernist magazine) before Moore, they met in 1918
-H. Auden

← Ezra the Enigma
Clara Tice: Drawing Outside of the Lines →