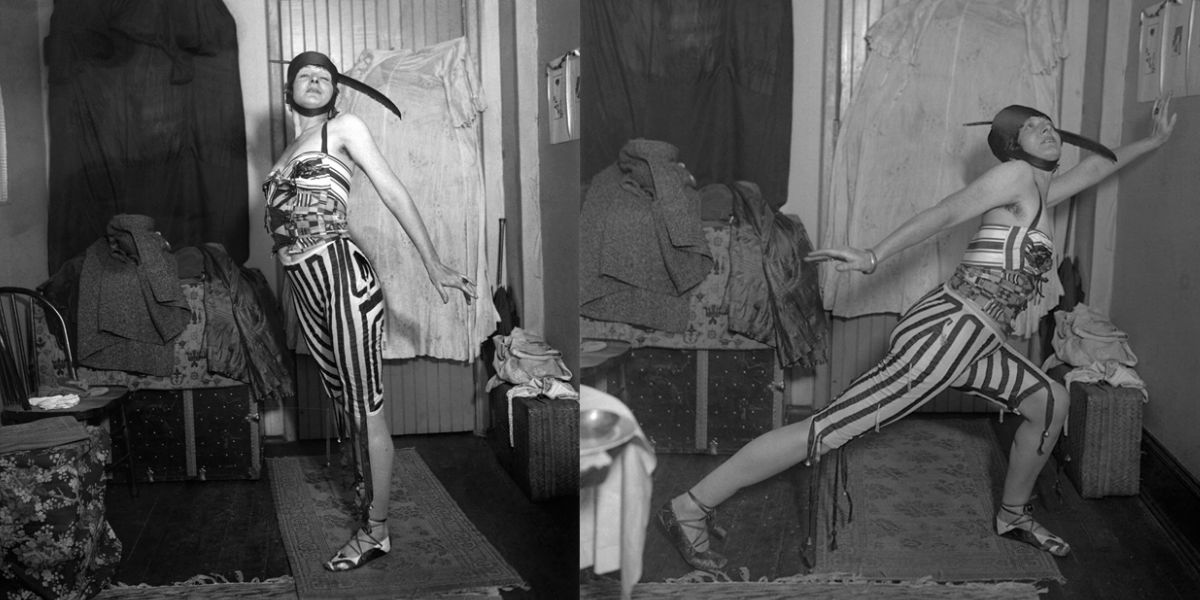 Although she shared the title of “Mother of Dada” with Gertrude Stein, no one in New York could argue that Baroness Elsa von Freytag-Loringhoven, who could be often spotted with a shaved head painted orange or postage stamps stuck to her face, didn’t look the part. Born Else Plötz in 1874 in the small town of Swinemünde, Germany, Elsa Plötz came to the United States in 1910 (Gammell. She was accompanying her then-husband, Felix Paul Greve, to Kentucky following his staged suicide. They stayed in Kentucky for only a year before Greve once again absconded, leaving Elsa on her own to make a living. After working briefly as an artist’s model in Cincinatti, she found her way to New York, settling at 130th Street in Harlem. A quick marriage followed to the German Baron Leopold von Freytag-Loringhoven, who would later commit suicide after five years as a prisoner of war (Gammel 164). During this time, the Baroness made connections through her modeling and social activities, beginning friendships and collaborations with artists and writers such as Marcel Duchamp, Djuna Barnes, and Morton Schamberg.

After a brief stint in Philadelphia and another in a Connecticut jail for espionage, the Baroness settled back in New York, this time on 14th Street at the edge of Greenwich Village, and began working on her art with a renewed intensity (Gammel xix). She sculpted a number of cutting-edge proto-Dadaist works, including “Cathedral” and “The Cast-Iron Lover,” the latter of which drew controversy from the art world. She also wrote a number of challenging sound poetry pieces, once of which was published in the Little Review at the same time as James Joyce’s Ulysses was being serialized. She continued her relationships with a number of important Dadaist figures as the movement took off in New York; in 1921, Duchamp and photographer Man Ray released a since-lost film titled Elsa, Baroness von Freytag-Loringhoven, Shaving Her Pubic Hair. Her eccentric dress and behavior made her an enigmatic figure in the New York Dada scene, and she overlapped with Loy in attendance New York artistic salons such as the Arensberg Apartment (Voyce 628).

Although the Baroness was a prolific sculptor and frequently contributed poetry to little magazines such as The Little Review (alongside Mina Loy), her most important contribution to Dadaism and the art world in general was the character of the Baroness herself. Endlessly enigmatic and aggressively quirky, she dressed herself as if just walking down the street was a performance: she could be found wearing everything from a live bird to a tin-can bra to a set of taillights (Lappin 309). This affinity for the movement, though, ran deeper than just costume. Publisher Jane Heap, who included the Baroness’s works in her Little Review, described her as “the first American dada […] the only one living anywhere who dresses dada, loves dada, lives dada” (qtd. in Jones, 5). Her relentlessly challenging public persona was a sort of constant Dada performance, which made her both indispensable to the burgeoning movement and a deeply alienating presence. Both Marcel Duchamp and William Carlos Williams famously rejected her romantic advances, the latter of which proved an embarrassing mishap that the Baroness later chronicled in her critical poem “Thee I Call Thee Hamlet of the Wedding Ring,” published in the Little Review (Gammel 270).

Many of the Baroness’s creations, both in sculpture and in fashion, were assemblages: she wore garbage picked up off the ground (or stolen), and she made her art from found materials as well (Lappin 309). As such, her work provided a direct precursor to Loy’s later assemblage art, and indeed the Dadaist concept of collage art. Stephen Voyce goes so far as to credit the Baroness as a direct inspiration for the punctuation style of Loy’s “Oh Marcel” (642). Although both of these women were much closer to famous men of the movement (often, as in the case of Duchamp, the same famous men) than with each other, they both contributed and received inspiration from the Dadaist movement — and they both faced a similar historical treatment. Like Loy, the Baroness went through great periods of financial dependency and destitution, which led to her move from New York to Berlin in 1922 (Gammell xvii).

On December 14, 1927, the Baroness was found dead of asphyxiation by gas in her apartment (Gammel xxi). Although many suspect that her death was suicide, she never left a note. Barnes continued to manage her letters and estate. A full collection of her poetry, Body Sweats, did not arrive until 2011. Like Loy, scholars have recently led a revival of interest her work and life, including Mamadada, a collaborative biodrama made collectively by over fifty filmmakers.

– Djuna Barnes (a good friend and even benefactor of the Baroness, especially during her later years in Berlin and Paris)

– Peggy Guggenheim (a financial and personal supporter of the Baroness)

– Mabel Dodge (the Baroness was a regular at her salons, including a peyote adventure [Gammel 168], while Dodge was in New York)