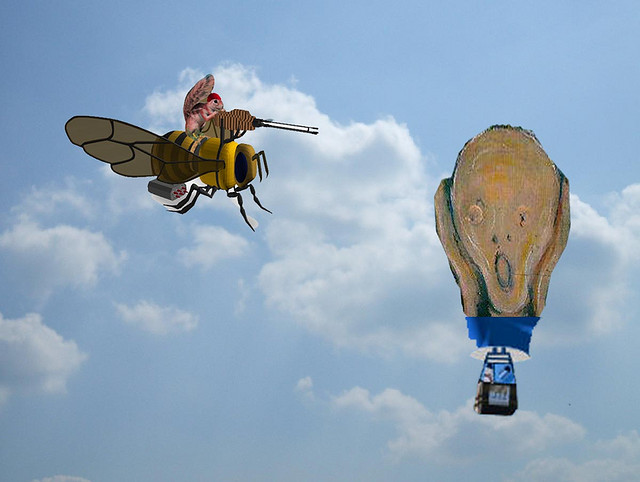 NBC’s Community blends high, low, and popular cultural references in a high-speed mash-up that substitutes speed for depth, and surface for interiority. The sit-com is, arguably, the epitome of postmodern pastiche.

Pastiche is a surface mix or medley of styles, allusions, and references, without the necessity of an underlining meaning, pattern, or unity. Joel Ormsby’s “scream balloon” is a pastiche that blends a face from Edvard Munsch’s expressionist composition The Scream (c. 1893-1910) with toy figurines and bits of tech equipment against a photograph of a blue sky. It’s an amusing medley, and you don’t have to know what it means to be stimulated or entertained by it. The postmodern reply to the modern consists of recognizing that the past, since it cannot really be destroyed, because its destruction leads to silence, must be revisited: but with irony, not innocently. I think of the postmodern attitude as that of a man who loves a very cultivated woman and knows that he cannot say to her ‘I love you madly’, because he knows that she knows (and that she knows he knows) that these words have already been written by Barbara Cartland. Still, there is a solution. He can say ‘As Barbara Cartland would put it, I love you madly’. At this point, having avoided false innocence, having said clearly that it is no longer possible to speak innocently, he will nevertheless have said what he wanted to say to the woman: that he loves her in an age of lost innocence. If the woman goes along with this, she will have received a declaration of love all the same. Neither of the two speakers will feel innocent, both will have accepted the challenge of the past, of the already said, which cannot be eliminated; both will consciously and with pleasure play the game of irony… But both will have succeeded, once again, in speaking of love. (67-68)

In a postmodern world, everything’s been said or done before. The only way to be original is to combine things in new ways. For Eco, there’s a loss of innocence in the postmodern condition, but there’s abundant recompense in the proliferation of meaning and pleasure.

Pastiche has become a hallmark of the postmodern sensibility; as the cultural critic Frederick Jameson puts it, “one of the most significant features or practices in postmodernism today is pastiche” (283). But Jameson takes a darker view of the postmodern, offering this definition of pastiche:

Pastiche is, like parody, the imitation of a peculiar or unique style, the wearing of a stylistic mask, speech in a dead language: but it is a neutral place of such mimicry, without parody’s ulterior motive, without the satirical impulse, without laughter, without that still latent feeling that there exists something normal compared with which what is being imitated is rather comic. Pastiche is blank parody, parody that has lost its sense of humor. (284)

If Jameson is right about pastiche, then what are the implications of his argument for NBC’s Community, a riotous medley of references and imitations of other popular media? Is it a hollow, pointless, humorless show? The sitcom has no apparent political agenda or social corrective,  yet it is certainly not “without laughter,” and I don’t think it “has lost its sense of humor,” either. Is Community just mindless entertainment, or is it a “smart” TV show that appeals to a nerdy intelligentsia? What is the point of this this sit-com, and why has it attracted such a powerful cult following?

← Empowerment Through Beyoncé’s Lemonade
The Image: The Necessary Medium for Memes →