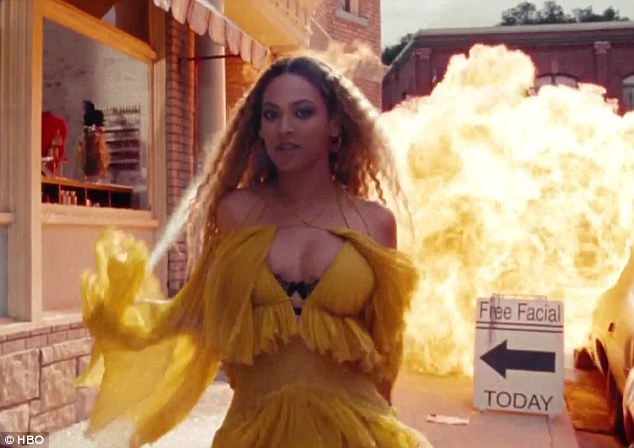 Moderator: Welcome! Tonight we have invited a group of critics to talk about Beyoncé’s hit new visual album, Lemonade. For the purpose of this conversation, we wanted to bring in a group of scholars, critics, and young people to allow us to better understand the cultural impact this piece has had on black female empowerment. So what did you all think about Beyoncé’s hot new album?

Bell Hooks: “My first response to Beyoncé’s visual album, Lemonade was WOW—this is the business of capitalist money making at its best. Viewers who like to suggest Lemonade was created solely or primarily for black female audiences are missing the point. Commodities, irrespective of their subject matter, are made, produced, and marketed to entice any and all consumers. Beyoncé’s audience is the world and that world of business and money-making has no color.” (Hooks) The piece isn’t about empowering black women. Instead it is about making money.

Blair LM Kelley: Wow really did not expect the conversation to start like that. In my opinion, “black feminism should be celebrating one woman’s work to portray her journey and her experience through her voice, her music, and her vision as a filmmaker. It’s not perfect, but just because it’s popular doesn’t make it a failure. In a world struggling against recognizing black women’s humanity, I think Lemonade is sweetwater indeed.” (Adelman) Furthermore, I would say that this piece is absolutely about empowering black women.

Will Byrd: In my opinion, the piece definitely has a goal of empowering black women. I would take Blair’s point a step further and say that the fact that Lemonade is so popular actually makes it more successful in accomplishing its goal of black female empowerment. Did you all see the SNL skit about Lemonade?

Blair LM Kelley: No, I must have missed it.

Will Byrd: Any way we can watch it right now? I think it provides a great setup for my next point.

Blair LM Kelley: How did I miss that?

Will Byrd: I think Saturday Night Live did an incredible job capturing the sentiment of white America after the album was released. Many white people were upset with her because of references to topics such as Black Lives Matter and slavery. Beyoncé truly embraces her black heritage in this piece in so many ways. The amazing thing about the piece is that it brings these themes and realities to the mainstream. She is quite literally telling her story as a black woman to a massive audience. Beyoncé is one of the most loved musicians in the world for both white and black communities. In Lemonade Beyoncé is acting as a bridge between these groups that have so much tension and she can do this because of her credibility and love in both of these communities. Bell, I will acknowledge that I don’t fully understand where you are coming from because I am a white man in America, but I think Beyoncé reaches me and people like me in a way that has the potential to help me become an ally and to better empathize with the causes of black and in particular black female empowerment. The sad reality is that white people are not exposed to these stories often. Beyoncé is helping change this by truly embracing her blackness in her visual album.

Bell Hooks: Will that is an interesting perspective. I don’t know if I fully agree, but even if your point is true, I don’t think her actions in the album effectively advocate for black women. “Contrary to misguided notions of gender equality, women do not and will not seize power and create self-love and self-esteem through violent acts.” (Hooks) In particular the song “Hold Up” “does not serve to undercut the prevailing cultural sentiment that it is acceptable to use violence to reinforce domination, especially in relations between men and women. Violence does not create positive change.” (Hooks) While Beyoncé’s piece is mainstream and does focus on the black female, the visual album does not represent my struggle or my people’s struggle in a realistic and productive way.

Blair LM Kelley: “Many things happened in the hour that is Lemonade and it seems like Bell Hooks missed many of them. Here she focuses on the moments surrounding “Hold Up” and fixating on Beyoncé prancing violently in the lovely yellow gown. Here hooks fails to recognize Oshun, the deity carrying her cleansing sweetwater while unfurling her anger on the world. Here Beyoncé reminds us of that sometimes the choice of anger is essential.” (Adelman) What is wrong with an angry black woman? Isn’t that sometimes necessary?

Will Byrd: Yeah, just to build off the last two statements, I really didn’t interpret Beyoncé’s actions in “Hold Up” to be angry or violent. Instead, I saw her as powerful and as a liberator as she walked through the streets. At one point she slams her baseball bat into a fire hydrant which erupts with water. What follows is a group of small black children running into the street to play in the water. The children are not scared of her! They are happy, they adore what she has done. In this song Beyoncé is speaking up for herself, but in doing so she doesn’t scare or bring true destruction to the community. She brings hope and excitement. She is an inspiration to all around her in the song! They are all smiling and happy!  There is plenty of symbolism in this song. We shouldn’t just take Beyoncé swinging a baseball bat as violence at face value.

Moderator: Well sadly that is all the time we have for tonight. I would like to thank all of our guests for coming and for being so honest about their interpretations of Lemonade.

1 Comments on “Empowerment Through Beyoncé’s Lemonade”